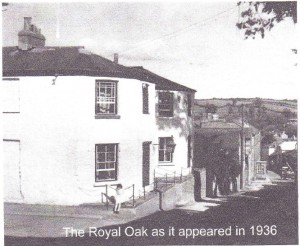 The Changing Scene at the Royal Oak

The Royal Oak is first mentioned on a 1881 Ordnance Survey map of Lostwithiel. Samuel Sampson, had been a wine, spirit and ale retailer, resident at Kingdon House (the main part of today’s Royal Oak) since at least 1871, so it is not known exactly when or why the name was changed.

Before this time records are scarce, but we know that in the 1860s the building we now know as the Royal Oak was run as a school, and was known as Kingdon House Academy. John and Jane Stephens opened the Academy in 1857, having previously run a similar establishment in Hillyar House. Nine male pupils between the ages of nine and 13 were under the tutelage of John Stephens and boarded at the Academy. The school must have flourished, as in 1865 the business expanded and moved to Norway House.

ln January of this year, Ann Tumser, John and Jane’s great granddaughter, who lives in California, paid a short visit to Lostwithiel. Ann has done much research about her ancestors and the town, and comes back regularly.

ln 1901 William, then aged 75, is described as a licensed victualler. By 1906 Mrs- Mary Burton, widowed the previous year, is shown as proprietress of the Royal Oak Hotel, Duke Street, Lostwithiel.

During the 1920s Richard Eyres was licensee’ ‘ He can be seen outside the Royal Oak with his son, Herbie, in a photograph taken in 1922′ Herbie’s daughter still lives in the town’.

Stan Philp took over as landlord in 1928 and remained there with his family for the next ten years. His daughter Hilary {now Woolcock) was born in the Royal Oak. Hilary remembers that the pub was then a St Austell Brewery house.

While Stan Philp lived there he was Town Sergeant and Town Crier. Many folk still remember a dramatic fire in 1936 that started under the stairs in the Oak. During and after the Second World War there were several licensees, including the names Marshall, Stephens and Brockley. 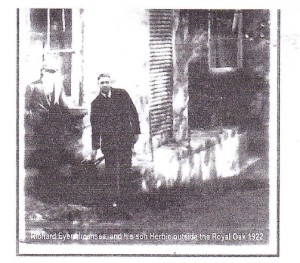 It is believed that Reg Crebo became landlord in about 1950 (an interesting letter to Mrs. Crebo is still on display in the Oak today). In the late 50s or early 60s Eddie and Lottie Carhart, together, took charge of the inn. Terry and Janet Sandercock held their wedding reception at the Royal Oak in March 1965.

Janet and Terry recollect the Carharts providing a memorable buffet. The family normally kept the large room to the right of the front door for their own use, only opening it up for special occasions. For the Sandercock’s wedding reception more than 60 guests were accommodated there.

The Carharts made an important change at the Oak when they had the licence altered. They reputedly paid £1,000 to have the licence extended from six days a week to seven and from closing at nine o’clock to later in the evening. The new licence also allowed them to serve spirits; previously only beer, cider, port and sherry had been on offer.

Towards the end of the 60s the pub was put on the market. The Carharts, who had been tenants, left and went to the King’s Arms, Luxulyan, later clearly remembered by people of Loswithiel.

The Oak in those days was a small, friendly local, like many pubs a few years ago, with very little food being served. Local residents remember an entrance to the pub through a door in King Street, which is now blocked up. 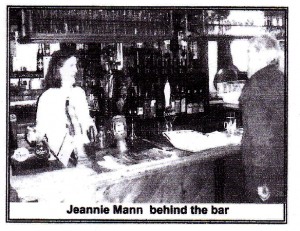 This door was the way in for those using the ’take-out’ facility, popular at the time, when a jug or bottle was taken in to be filled with draught ale. What is now the saloon bar at the front of the pub was then a room with simple furnishings, a dartboard and table skittles. The bar that is there today did not exist and drinks were served through a small hatch through to the main bar at the back.

ln 1974 Eileen married John Wills and she remained landlady until January 1976 when the licence passed to Jonathan and CarolArthur.

During their tenure, the Arthurs purchased Kingdon Cottage, next door in King Street. This cottage had, for many years, been home to the Jephcott family. This acquisition enlarged the premises, housing a new kitchen, living accommodation and an office. This enabled the ‘public’ area of the Royal Oak to be extended.

ln 1980 Sid Cathery bought the pub. He built on the room that is reached through the large room to the right of the main entrance.

The Mann family took over in 1984. Jeannie Mann has been closely connected to the Royal Oak for many years. Today she is still to be found behind the bar during some of the lunch time sessions.

During the 1980s a couple who then ran the Penlee Hotelin Fowey, Eileen and Malcolm Hine, were regular visitors to the Royal Oak, with their daughters Helen and Alison.

ln 1988, when the pub came on the market again, the Hines decided to buy it. Eileen and Malcolm remained at the helm for 17 years, during which time the fare at the Royal Oak became celebrated.

Mrs. Hine’s Cow Pie and Mrs. Hine’s Curry were amongst the items on the menu that attracted many fans from far and wide. The Hines took great pride in offering a varied selection of ‘real ales’. ln 1989 they staged a very successful two-day beer festival at the Oak.

During their ownership the Royal Oak featured many times in the Good Beer Guide. ln 2003 the inn was proclaimed South West Pub of the Year.

One tradition that Malcolm and Eileen established was a get-together at the Oak after concerts in St Bartholomew’s church by the Mevagissey Male Voice Choir.

During Carnival week the Royal Oak often sponsored the band or choir that performed in town, the entertainment again transferring up the hill to the Oak later on, with plenty of hospitality for all.

Eileen recalls, with amusement, the occasion when the Royal Oak won the Carnival prize in the fancy dress parade, with their theme ‘Past lt Ninja Turtles’. 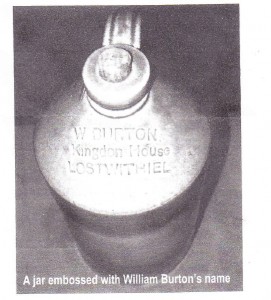 Malcolm describes the back bar of the inn when they first moved in – there was a settle by the distinctive pole in the room and a step down into a slightly lower area, with a hatch through into the kitchen.

These flagstones are only dressed on top, underneath the surface are large boulders.

lt is difficult to be precise dating the present building; lt is likely to date from the early 1800s. However, down in the cellar there is evidence of a much older building, built of different stone. There also appears to have been an underground passage to the other side of the road.

ln 2005 the Hines headed off for a well-deserved retirement, to a home only a stone’s throw away from the Royal Oak.

The inn was  bought by Punch Taverns who sold the leasehold to Colin Phillips. Six rooms with en suite accommodation are on offer, following a tradition established for many years.

Lostwithiel waits with interest to see how a favourite ‘local’ develops in character. A certain continuity is assured, as the familiar figure of Jeannie Mann behind the bar and the frequent presence of Malcolm and Eileen Hine, in their new role as customers, surely testifies.